HIGH SCHOOL ATHLETES ARE HONORED AT THE "2022 BUTCH DELLECAVE AWARDS"

HIGH SCHOOL ATHLETES ARE HONORED AT THE "2022 BUTCH DELLECAVE AWARDS"

We are thrilled to announce that at the Dellecave Awards Ceremony, honoring the top student-athletes in Suffolk County, Hauppauge was extremely well represented.  This prestigious award is presented annually to the top female and male Suffolk County student-athletes who demonstrate excellence in athletics, academics and community service.
The Hauppauge Nominees for the Award were Seniors Bella Salvia, Volleyball and Softball, and Jake Nielsen, Swimming and Cross Country, who were chosen as Hauppauge’s top student-athletes. Bella and Jake attended the ceremony this past Sunday at Villa Lombardi’s along with the award winners from 51 other schools in Suffolk County. The list was then pared down to a group of finalists and both Jake and Bella were chosen for this prestigious distinction of being Dellecave Finalists.
When the winners were announced, it was Hauppauge’s Jake Nielsen who was named the 2022 Recipient of the Butch Dellecave Award as the Top Male Student-Athlete in Suffolk County. Jake had an outstanding senior season as a member of the Hauppauge Swim Team, culminating in being crowned New York State Champion in the 50 Freestyle and being named Newsday’s Long Island Swimmer of the Year. Jake is Hauppauge’s first recipient since 2017 when Katie Murphy was selected as the winner.
Congratulations to both Jake and Bella on outstanding high school careers and on receiving these prestigious honors. We can not thank them enough for the way they have represented the Hauppauge Athletic Department, school, and community and for the example and standard they have set for those who will follow in their footsteps. We wish them well and look forward to their future successes as they embark on their academic and athletic careers at the college level next year. Bella will be playing volleyball at Kings College and Jake will be swimming at Geneseo.
Thank you and congratulations to their families, coaches, teachers, and school community for their support throughout this journey.
Go Eagles! 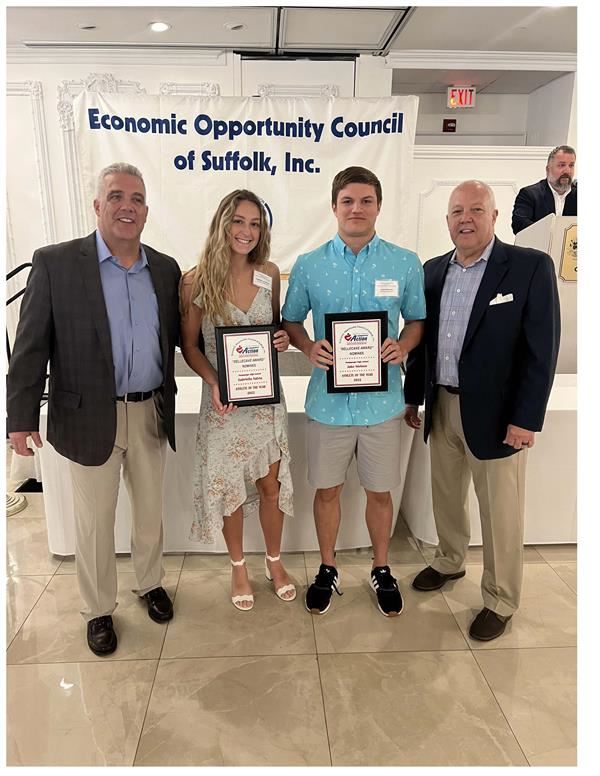